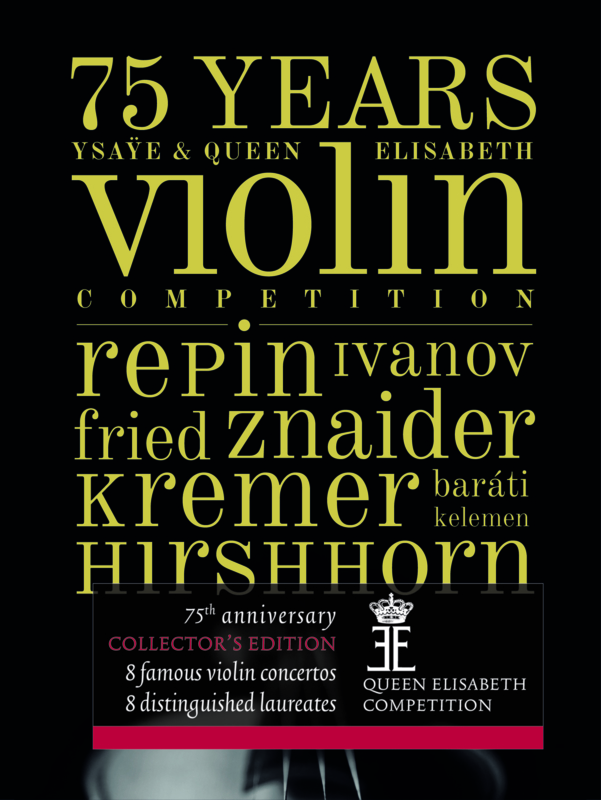 In 2012 the Queen Elisabeth Music Competition celebrated the 75th anniversary of the Eugène Ysaÿe Competition. In association with the muso label, the Queen Elisabeth Competition has drawn on its extensive archives of unreleased recordings to put together a 4CD box set containing 8 of the most celebrated violin concertos as performed by some of the laureates who have made their mark on the history of the Competition. Handsomely presented as a CD-book, with texts, photographs, and reminiscences by laureates, the set contains live recordings made between 1967 and 2005, which were painstakingly remastered in 2011 in order to ensure optimal sound quality for today’s listeners.
Founded in 1937 on the initiative of Queen Elisabeth, the first Ysaÿe Competition brought to Brussels a number of talented young violinists and a jury that would be the stuff of dreams for any lover of the instrument – and the name of the first laureate showed just how high the standard was: David Oistrakh! After an interruption caused by the Second World War, the Competition was revived in 1951, when it took the name of its patron: in future it would be known as the Queen Elisabeth Music Competition. The list of the laureates who have succeeded each other onstage at the ‘Palais des Beaux-Arts’ over its 75 years is dazzling: Kogan, Senofsky, Sitkovetsky, Laredo, Michlin, Hirshhorn, Kremer, Fried, Horigome, Repin, Znaider, Skride, and Khachatryan, to name but a few.
The set opens in 1967 with the Paganini Concerto, played by Philippe Hirshhorn – the quality of sound on this newly restored recording offers an opportunity to rediscover this great artist and teacher, who died in 1996, but not before he had influenced several generations of musicians – and the Elgar Concerto as interpreted by Gidon Kremer, never previously available on disc! It continues with performances by Miriam Fried in Mendelssohn, Tchaikovsky’s indispensable concerto from Vadim Repin in 1989, and an equally memorable performance of the Sibelius Concerto by Nikolaj Znaider from 1997, the same year as Kristóf Baráti’s superb Beethoven concerto. The compilation concludes with two laureates from the past decade: the Hungarian violinist Barnabás Kelemen in the Bartók Concerto and, finally, Belgium’s own Yossif Ivanov in the Shostakovich.
Eight concertos, eight artists, eight sensibilities, and eight very different sonorities can be enjoyed in these performances, each of which in its own way struck a chord with the jury and audience of the Queen Elisabeth Music Competition.