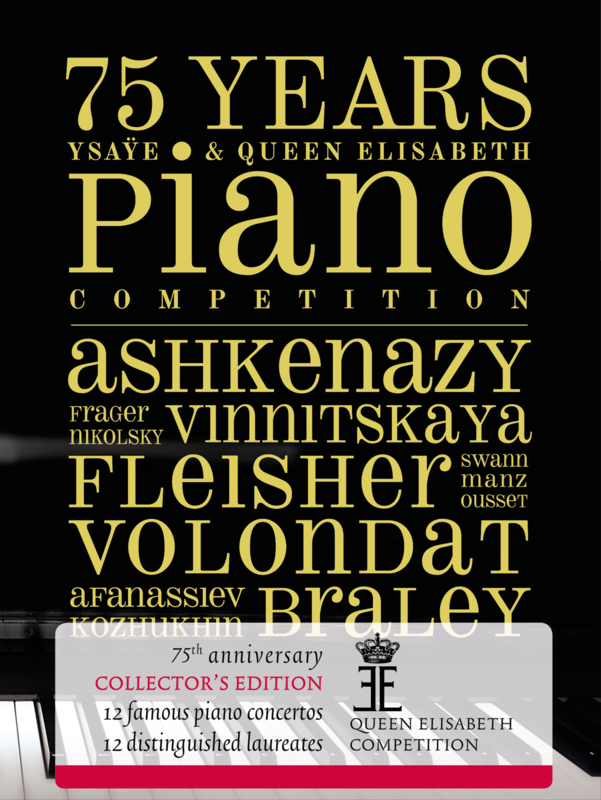 In 2012, the Queen Elisabeth International Music Competition celebrated the 75th anniversary of the Eugène Ysaÿe Competition, inaugurated in 1937 on the initiative of Queen Elisabeth of Belgium. That very first competition, devoted to the violin and won by David Oistrakh, was followed in 1938 by the first competition for the piano, which was one by another, equally prestigious, Russian: Emil Gilels!
After an interruption caused by the Second World War, the Competition returned, taking the name of its patron: from now on, it would be known as the Queen Elisabeth Competition. The first piano competition, in 1952, was won by an American whose name would go down in history: Leon Fleisher.
Now a veritable institution, the Competition has for three quarters of a century been one of the most prestigious of its kind and one of the most demanding for its participants. The quality of its international jury, brought together year after year to judge talented young musicians from every corner of the world, is one of its most important assets.
Following the success of the box set devoted to the violin, which was released in 2012, muso has delved in the treasure trove of the Queen Elisabeth Competition’s archives once again and put together a de luxe box set of 5 CDs, containing 12 of the most celebrated piano concertos in the repertoire as performed by outstanding laureates, including 9 First Laureates. Almost 60 years separate the performances of Leon Fleisher (1952) in Brahms’s First Concerto and Denis Kozhukhin (2010) in his Second; for the first time on CD, we can now enjoy that incredible evening in 1983 when a young Frenchman, Pierre-Alain Volondat, just 20 years of age, triumphed in Liszt’s Second Concerto, making his mark on the history of the Competition. Prominent in this selection, too, are those laureates who won a succession of the Competition’s First Prizes against the background of the Cold War: the Russians Vladimir Ashkenazy, Valery Afanassiev, and Andrei Nikolsky and the Americans Malcolm Frager and Jeffrey Swann. This set also allows us to rediscover personalities who made a sensational impact on both audiences and juries: Cécile Ousset in 1956 and the emerging talents of Frank Braley in 1991, the German pianist Wolfgang Manz in 1983, and, more recently, Anna Vinnitskaya.
Presented in a luxury book-disc that has been produced in the best possible technical conditions on the basis of archives spanning more than half a century, this box set plunges you into the electric atmosphere of the Brussels Palais des Beaux-Arts (Centre for Fine Arts) on those unforgettable final evenings.