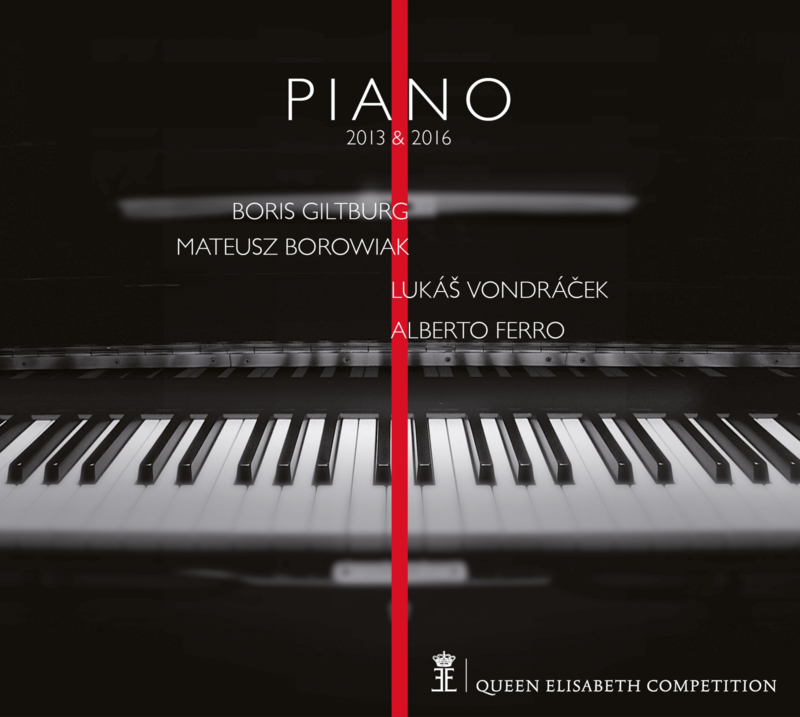 On the occasion of the Queen Elisabeth Piano Competition 2021, a 4CD boxset includes mostly so far unreleased performances of the First Prizes and winners of the Musiq3 and the Canvas-Klaraprijs audience prize from the last two sessions of the Piano Competition, in 2013 and 2016.

In this boxset you will find:

The CD-box opens with Boris Giltburg in a completely new programme, including his Mozart concerto from the semi-final and the famous Liszt Sonata. The Israeli musician’s smile is to be found in his resplendently accomplished playing. Everything is here: impeccable technique, a feel for phrasing, affecting poetry, well-dosed outbursts, velvety pianos. Nothing can withstand this immense talent whose international career is more than ever confirmed.
We continue with the British-Polish Mateusz Borowiak in a programme that reflects his personality and his subtly poetic playing in which elegance and stylistic precision go hand in hand with an open tone and clear sense of phrasing. His “Young Man” Mozart Concerto was one of the 2013 session’s great moments; Bach and Ravel are the perfect complement to the programme of this highly refined musician.
Next comes the Czech Lukáš Vondráček in Brahms’ 3rd Sonata and Rachmaninov’s 3rd Concerto, his mastery and intensity unquestionably taking him to the top of the podium in 2016. An artiste with strongly expressive playing and the ability to make the piano sing: a light, luminous tone, a lyrical and finely percussive touch with smooth phrasing. Vondráček brings out all the music’s emotion by lending each note the correct depth within a musical line that is perfectly shaped.
The boxset concludes with Alberto Ferro, winner of the audience prize at the age of only 20 yet already an accomplished musician. His Mozart Concerto was a moment of pure joy in 2016: finely sculpted sonorities, expressive phrasing, revealing imagination and magnificent commitment. Then in the Rachmaninov as in the Liszt, the Italian displays the full range of his mastery embellished with the right amount of spirit and style.

Four pianists with very different artistic personalities, each nonetheless having left his mark on the last two sessions of the Queen Elisabeth Competition and provided some magnificent musical moments, are to be found in this CD-box.