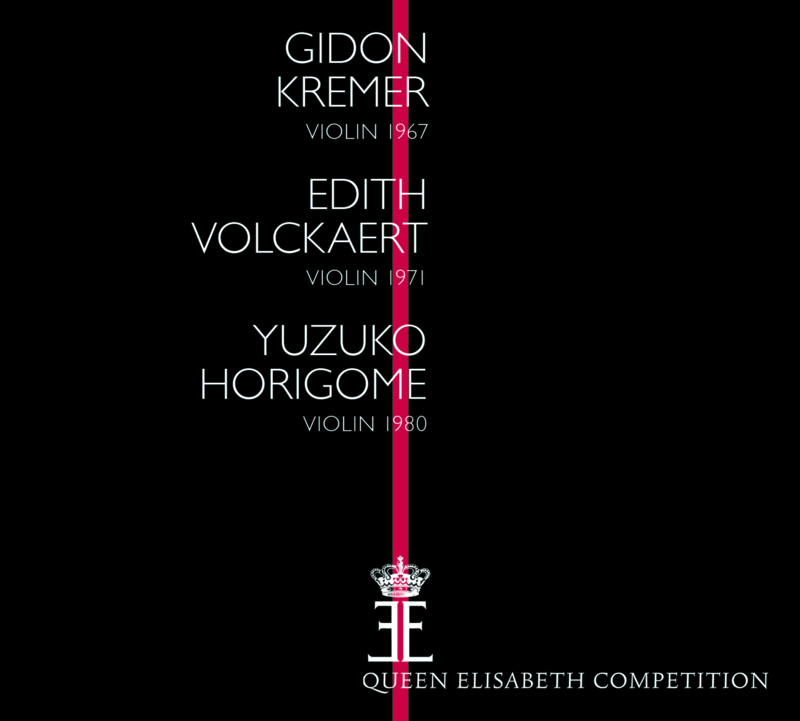 After the three discs of the pianists Jean-Claude Vanden Eynden, Abdel Rahman El Bacha and Frank Braley released in 2016, the time has come to look at the other major instrument of the competition: the violin.
Whereas some historic performances of laureates are still available and have been released many times already, this box-set of three discs will enable us to relive some hitherto unreleased moments of the violin competition, featuring three laureates with very different personalities.
Chronologically we start in May 1967 – the year of Philippe Hirschhorn’s First Prize – with the very first recordings of a young, 20 year old Latvian, Gidon Kremer. Winning third place that year, this exceptional musical personality already showed all the passionate musicianship that led him on to his well-known career over the past fifty years.
After this comes a disc of a Belgian violinist revealed by the competition of 1971, Edith Volckaert. This young woman from Ghent was precociously brilliant, becoming a great international soloist as well as a great teacher; her career was shattered by illness at the age of 42. She came fifth in the competition, and despite tiredness at some points in the Shostakovich First Concerto performed during the final, she displayed a radiant sonority, superb phrasing, technical clarity, with attention paid to every gesture, every note, her playing being both straightforward and extraordinarily natural. Her Second Concerto of Bartók played at the laureates’ concert is amazing.
Finally, 1980 witnessed the success of a Japanese laureate who was immediately ‘adopted’ by the Belgian public and the international music scene: Yuzuko Horigome. Already highly impressive during the semi-finals (her Ysaÿe Sonata is quite simply splendid), she confirmed this impression in the final with a Brahms Sonata of incredible musicality, followed by a Sibelius Concerto that was one of the finest moments of the whole competition.